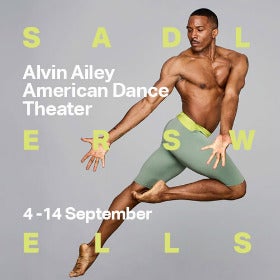 Having just celebrated their 60th anniversary, Alvin Ailey American Dance Theater bring with them a flood of new and exciting works alongside modern classics in three mixed programmes that demonstrate the unparalleled artistry that has defined them.

Alvin Ailey’s masterpiece, and the company’s signature piece, signs off each one of their shows. Performed as a closing prayer, Revelations veers from grief to elation as it explores African-American cultural heritage and spirituality alongside an emotional score of gospel music and blues.

Alvin Ailey’s American Dance Theater dancer and rising-star choreographer Jamar Roberts takes an abstract look into the notion of one “having the blues” in Members Don’t Get Weary, set to the music of John Coltrane. To celebrate the centenary of Ella Fitzgerald’s birth, Robert Battle matches the legendary singer’s Airmail Special to a dizzyingly fast duet in Ella., plus new work from multi-faceted choreographer Darrell Grand Moultrie.