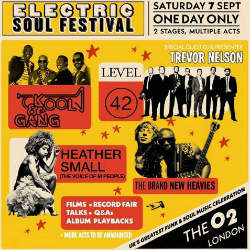 Four iconic acts will appear on the smoothest line-up of the year at The O2 on Saturday 7 September 2019, in what will be THE key date in the calendar for funk and soul fans, the inaugural Electric Soul Festival.

This one day only festival for soul brothers and sisters across the UK, hosted by legendary DJ Trevor Nelson, will feature three of the biggest ever bastions of British bass music, Level 42, Heather Small, and The Brand New Heavies, plus direct from the USA, post-Disco hitmakers Kool & The Gang, with further acoustic acts to be announced.

Commenting on the new festival, Trevor Nelson said, “I’m unbelievably excited to host the first ever Electric Soul Festival. We have massive day festivals for every other type of genre, so it’s about time we had one for funk and soul – the most influential and, obviously, my personal favourite kind of music! It’s an amazing line-up of acts that have sold millions across the globe, not to mention all the extra things that’ll be going on around The O2 across the day – I can’t wait!”

Between them, these artists have shaped popular music across the globe - inspiring new genres, selling millions of records, wining Grammy Awards and providing the soundtrack to so many.

A one-stop shop for soundsystem supremo’s, this is the biggest line-up for lovers of smooth soul and frivolous funk grooves nationwide.