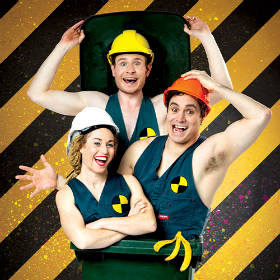 Winners of the best Children’s presentation at the Adelaide Fringe Festival 2016 and 2015, and runners up for children’s choice ward 2016 the Trash Test Dummies are as full of laughs as their bins are full of surprises. “Delightfully intelligent, highly entertaining
Returning from a sell out Season at the Edinburgh Fringe with rave reviews, this award winning, sidesplitting slapstick comedy routine takes the household wheelie bin to new heights, and delivers a dump-truck full of hilarity! “Circus and acrobatic show perfect for families.
Nominees of the 2015 Perth Fringe World Circus Award, and winners of the Gas works Circus Showdown 2014, the Trash Test Dummies is a family friendly, circus comedy show like no other. “Dungeree’d Dummies from down under create an adventure playground out of dustbins.
Leigh Rhodes, Thomas McDonald and Amy Nightingale-Olsen are highly skilled circus performers that can trash talk with the best of them. These dexterous dummies take the audience on a journey into their playful imagination, where they invite them to take a fresh look at the humble household wheelie bin."Three men took to the stage with their wheelie bins, what happened next blew our minds.